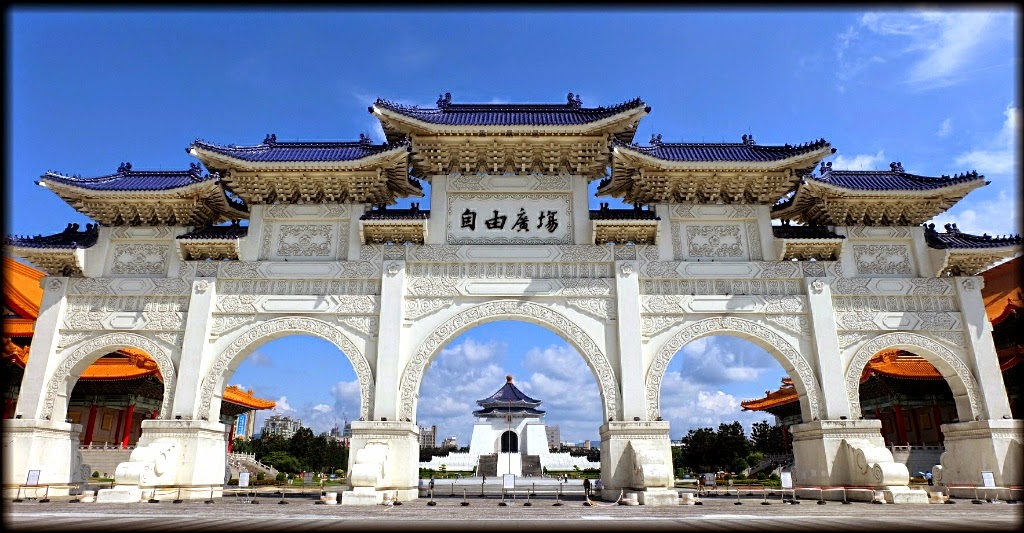 This grandiose memorial to Taiwan's former dictator is perhaps one of Taiwan's most memorable landmarks, and certainly one of its most controversial. A giant statue of the Generalissimo sits atop 89 steps (one for each year of his life), overlooking a 240 000 square metre public square and (perhaps more importantly for the general) looking out towards the China he lost and always vowed to re-take. Beneath the giant statue is a museum offering Chiang's account of the turbulent 20th century Chinese politics, including the invasion of China by Japan, the rise of the Republic of China, its defeat to the communists and subsequent retreat to Taiwan, which it has occupied since. The site is also home to the National Concert Hall and National Theatre.

One could easily come away thinking that Chiang Kai Shek was a highly revered leader of China, who "liberated" Taiwan from the Japanese empire (which, by the way, it apparently defeated, almost single-handedly) and developed Taiwan into the thriving, prosperous democracy it is today. Unfortunately, nothing could be further from the truth. It was through his party's corruption and incompetence that he lost China to begin with - despite massive US logistical and financial support - after which he and his army had no option but to retreat to Taiwan, which the US 'gave' them because they were fighting communists, and because they didn't want Japan to keep such a strategic island so close to China and SE Asia. Chiang and his Kuomintang Party then pillaged Taiwan, sending anything of value to China (to fund their civil war) and set the economy back decades through their mismanagement and corruption. They then held Taiwan under martial law for sixty forty years, murdering thousands of dissidents who had other ideas for Taiwan, or were accused thereof. For more about this White Terror era please see 2-28 Peace Park and Museum.


While the memorial is an important relic of Taiwan's totalitarian past, the public square itself played a pivotal role in Taiwan's transition to democracy, being the most popular spot for the mass rallies of the '80s and '90s. It's still widely used for a range of social and political gatherings today, and is a very pleasant place to stroll around and watch the crowds, weather-permitting. It also has a small garden, but it's not as impressive as Chung Shan Park at Sun Yat Sen Memorial Hall.


In 2007 pro-independence president Chen Shui Bian renamed the complex Liberty Square (自由廣場), better reflecting its current use and its role in Taiwan's modern history, however this didn't sit well with the Kuomintang officials (Chiang's political descendants), and a bitter dispute entailed. In the end a compromise was reached with the public square retaining its new title of Liberty Square (also sometimes called Liberty Plaza) while the building and monument were restored to Chiang Kai Shek Memorial Hall (中正纪念堂), which is still used for its MRT station.

Agarwood is an over-priced vegetarian restaurant in Chiang Kai Shek Memorial Hall itself, but vegans should take note that, despite bold claims in English, it's certainly not all vegan. I recommend Oh Cha Cha, an American sandwich and drinks bar famous for its simple, healthy meals, just one stop away at Guting Station. Their smoothies and raw desserts are amazing. Take the green Xindian line to Guting, Walk straight out of Exit 2 and take the first lane on the right. The restaurant is well signposted (in English) and is on the first intersection after turning right, only a minute from Exit 2.


Nearby Attractions
I strongly recommend making a day of Taiwan history, and following this with its polar opposite: the 2-28 Memorial Museum, located in 2-28 Peace Memorial Park. It's small, humble affair, housed in the old radio station which broadcast many key events in Taiwan's history. While it doesn't have a lot of English signs, the photos and old movie footage speak for themselves, and most of the video has English subtitles. AV sets It's also situated in the charming 2-28 Peace Park. It's a fairly pleasant walk from Chiang Kai Shek Memorial Hall, passing by the Presidential Palace, or else it's one stop on the MRT at National Taiwan University Hospital Station.