The vast majority of international travellers will arrive at Taiwan Taoyuan International Airport, which is (as its name suggests) somewhat inconveniently located in neighbouring Taoyuan County. Taipei's older and much more conveniently located Taipei Songshan Airport is used mostly for domestic flights, but also for flights to Japan, China and Korea. With such a good public transport system don't even think about flying domestically in Taiwan, unless it's to an outlying island. Taichung and Kaohsiung airports have a few international flights, especially to China and Japan, and Japan's excellent budget carrier Peach sometimes offer flights to Kaohsiung for less than to Taoyuan. The odd charter flight leaves Hualien for Japan's remote but fascinating Yonaguni, but you'll do well to score a seat on one.


Formerly known as Chiang Kai Shek International Airport (after Taiwan's former murderous dictator) and now more appropriately known as Taipei Taoyuan International Airport (臺灣桃園國際機場) to differentiate it from Taipei Songshan Airport in Taipei, this is Taiwan's major hub and home to the two main Taiwanese carriers, the state-run China Airlines (not to be confused for Air China) and EVA Air.
As an important aside, I strongly recommend not flying Vanilla Air to or from Japan.

There are two terminals so it's important to check your itinerary to see which terminal you depart from before you board a bus for the airport. A skytrain connects the two terminals, as does a slower ground-based shuttle. Terminal 2 is newer, larger and busier.

It's rather inconvenient that there's currently no direct rail connection, however a new MRT is under construction and was planned to open in December 2015, but this date has been pushed back indefinitely. It is, however, expected to open soon (as of February, 2017).


The simplest, cheapest and greenest way to travel between Taipei and Taoyuan Airport is by bus. A handful of companies run buses from the bus stations (in both terminals), with most having a service to Taipei Main Station. While all services are cheap by Western standards and reasonably comfortable, prices and schedules vary between companies, and prices generally reflect the quality of the service offered; cheaper buses generally also make more stops along the way which can increase travel time considerably.

As of February, 2017, the Taipei West Bus Station (shown above) is no longer in use, probably because of the new MRT, however as a result of its delay buses to Taoyuan International Airport (TPE) now depart from a makeshift bus station outside the East Exits of the ground floor of Taipei Main Station. Follow signs. The express bus should take under an hour, but can be delayed due to heavy traffic. They currently run to the airport all night.

Buses also connect the airport with other city hubs, including Taipei City Hall  (for Taipei 101), and Xindian Station (for Bitan), however these buses don't run all night. Taking these buses can reduce delays getting out of central Taipei, especially at peak traffic times. Once the new MRT opens, however, this is expected to be by far the fastest and most efficient way to reach the airport.

For a more comfortable journey, or if coming from the south, take the High Speed Rail to Taoyuan Station. From there it's about a 20 minute shuttle ride to the airport. If you're flying EVA or China Airlines it's possible to check in at the HSR station, and then just turn up at the airport and board your flight. There's not a lot to do around the station, but it saves hauling your luggage up to the departures area. While the HSR won't be affected by traffic jams, note that seats can sell out at busy times (and they don't always sell non-reserved seats) so book your ticket in advance for a safe, almost-guaranteed trip to the airport. I say almost guaranteed because in the unlikely event of an earthquake it grinds to a halt until the tracks are checked, no doubt resulting in a few missed flights.

There's really no need for a taxi to or from Taipei, but if you want to try it's best to agree on a price first (this applies to all inter-city fares, but not within Taipei City, such as to Songshan Airport, for which the driver will expect to use the meter). Rates to Taoyuan Airport from Taipei start at around 800NT off peak, but are likely to be over 1000 during the day, and more coming from the airport. Ignore any touts who may approach you from within the airport and instead follow signs to the proper taxi stand.

Most luggage services are handled by the Pelican company. Luggage storage costs 100NT per day for a small item (total of three dimensions up to 150cm and weight up to 25kg) and up to 300NT per day for a large or heavy item. They can also pick up and deliver luggage, or transfer it between terminals.
The airport also offers a "Bonded Luggage Service" for passengers transferring at Taoyuan. Luggage is left at the service centre before passing through customs, and then collected before boarding your final flight. This service cannot be used once through customs. While it's a good (and very cheap) service for passengers transferring through or stopping over in Taipei, be sure to check online and call to confirm that you're entitled to use the service before working it into your plans.
There are no lockers at Taoyuan Airport.

If you have an early or late flight there are a handful of hotels around the airport, but few of them are within a few kilometres. The Novotel is a couple of kilometres and runs a regular shuttle bus, so is the best option close to the airport. Rooms starting at around 150 USD.

There are also hotels in the nearby Taoyuan City, but with buses to and from Taipei West Bus Station Terminal A running all night (about 40 minutes in light traffic) I recommend staying at the Novotel (or another hotel near the airport) for very early or late flights, but otherwise just taking a bus into Taipei and staying near Taipei Main Station. Beware that as of September 2015, Google Maps does not get the times correct for the first and last MRT trains, so for an early or late flight it's important to check with station staff or stay near Taipei Main Station (or take a taxi).

Taipei Songshan Airport (台北松山機場) was Taipei's first airport, established in 1936 as a military air base during the Japanese administration of Taiwan. It's been used for civilian flights since 1950, however due to its smaller runway size than Taoyuan Airport it's mostly only used for domestic flights and international flights to Japan, China and Korea.

Located in downtown Taipei with its own MRT station, Songshan airport is much more accessible from Taipei than Taoyuan. And since 2009 the airport has been operating "city-to-city" flights to respective inner-city airports Gimpo (in Seoul) and Haneda (in Tokyo), saving commuting times at both ends of these journeys. For example a Songshan to Haneda flight saves approximately an half an hour of commuting time in Taiwan and at least an hour getting from Tokyo's very inconveniently located Narita Airport (and usually an expensive train ticket to Tokyo). While often slightly more expensive, the extra cost is often easily saved in transport, especially if you would otherwise have taken the comfortable but expensive Narita Express. It's well worth searching for a flight to Songshan if available.

Songshan Airport Station is on the brown Muzha Line. It's about 20 minutes from Taipei Main Station, unfortunately requiring a transfer at Zhongxiao Fuxing Station. The transfer requires a fair amount of walking, so you may wish to consider a taxi if you have heavy luggage, but beware that the roads around that part of Taipei can become quite congested, especially during peak times, so factor plenty of time if you opt for a taxi. It's about 6km from Taipei Main Station, and taxis will expect (rightly) to use the meter, which should come to around 200NT, but possibly more during busy times. If the driver takes diversions it may well be to avoid busy traffic, as rip-off taxi rides (as in India or Thailand) are uncommon (but no unheard of) in Taiwan.

Taichung International Airport (臺中航空站) is a shared civilian and military airport, with a few scheduled international flights to China, Korea and Vietnam, and a few charter flights to other international destinations. It's about an hour and a half from Taiching by bus, and further from the High Speed Rail Station. The most likely reason any traveller would pass through Taichung Airport would be a domestic flight to Magung (Penghu) as it's the closest airport on the mainland. Flights also depart for Kinmen. 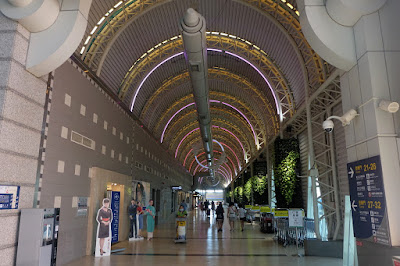 The introduction of the High Speed Rail hit Kaohsiung International Airport (高雄國際航空站) hard, with passengers often opting to travel to Songshan or Taoyuan for cheaper flights, however it's surviving largely through international flights to Japan, China and Korea, as for all these destinations an HSR ticket would add to the cost of the trip, in time and money, considerably. It also serves the Philippines and Vietnam, popular routes for the thousands of foreign labourers.

The airport is increasingly being used by Japan's new LCCs (Low Cost Carriers), particulary Peach Airline, however it's important to understand the risks involved with flying an LCC. I strongly recommend avoiding Vanilla Air at all costs. If you are travelling from or onwards to Japan, and if you only have time to see one coast in Taiwan (eg the HSR Rail Pass trip down the West Coast) then consider flying into Taoyuan (or Songshan) and out of Kaohsiung or vice versa. I would even consider a side trip from Taiwan to Okinawa, which is much closer to Taiwan than it is to most of Japan. Kaohsiung Airport is conveniently located on the city's great MRT system, only half an hour from Kaohsiung Station, however it's a short walk from the MRT station to the departures area.