Last updated: Jaunary, 2019
This page covers the five popular Taroko Gorge trails which are flat and easy, can be reached by public transport, and don't require advanced entry permits. They are presented in order reached when coming from Hualien (travelling into the gorge). I recommend starting early and completing them in this order, in order to escape the crowds who arrive at the Eternal Springs Shrine from late morning. 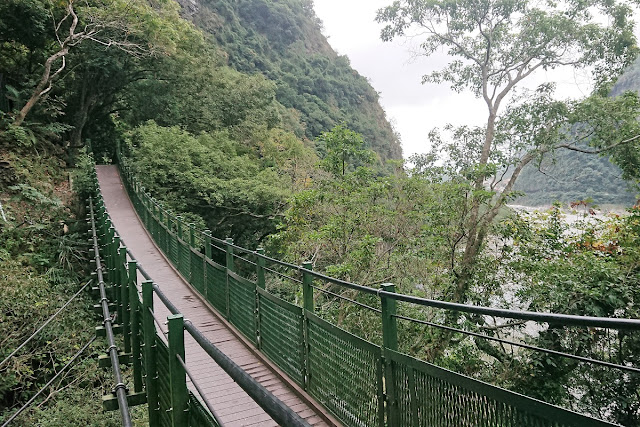 This new, 650-metre path offers stunning views of the Liwu River far below. It starts just after the visitor's centre, and then conveniently connects with the Shakadang Trail. It's mostly along a boardwalk, sometimes very high, so is not suitable for anyone with a fear of heights.
To reach the Xiaozhuilu Trail, walk into the gorge from the visitor's centre, and you'll soon enter the Shakadang Tunnel. Enter the left side of the tunnel, and the entrance to the trail will come off (to the left) after about 300 metres.

The Shakadang  Trail (砂卡噹步道, previously Mysteriously Valley Trail) is the most accessible trail in Taroko Gorge, but as a result it is also the busiest, with tourists arriving by the busload, especially during the afternoon. It's best to arrive early, ideally on one of the first buses out of Hualien Station. The four-kilometre trail follows the Shakadang River through a stunning valley, and is mostly chiseled out of the cliffs, fairly flat and usually at least a metre wide, making it suitable for all age groups and levels of fitness.

The Shakadang Trail follows perfectly from the Xiaozhuilu Trail. Alternatively, it's possible to walk to the entrance from the visitor's centre in about ten minutes, most of which is through the safe but unpleasant Shakadang Tunnel. Steps lead down to the tunnel from the bridge just after the Shakadang Tunnel. It's also possible (but less safe) to walk from the Eternal Springs Shrine.

The Eternal Springs Shrine (長春祠, also called Changchun Shrine) is Taroko's most famous site, and certainly the most popular. It was originally built in the 1950s, but the current construction was built during the 1990s (after damage from landslides). The shrine serves as a memorial to the more than two hundred men who lost their lives building the Central Cross-Island highway (1956 - 1960). The shrine is built around a natural spring, from which water appears out of the cliff seemingly from nowhere, and is quite a remarkable geological  formation (even if a not-so-well-hidden water pipe also helps add volume to the waterfall for added effect).

Being the closest to Hualien and the gorge's most famous spot, it can become unbearably crowded, especially mid-afternoon, with tour buses arriving by the dozen. But this is becoming less of a problem now that the Chinese government is restricting the number of its citizens it allows to visit Taiwan.

The eternal Springs Shrine Trail, however, usually remains surprisingly empty, and while it's no match for other trails in the park, it does offer some spectacular views of the gorge and a chance to observe the tourist masses below. While the trail is fairly well established, it's quite narrow in places and deceptively steep, so take it slowly. The path leads up to the Bell Tower , another memorial to those who lost their lives building the highway, a tiny Buddhist temple in a natural cave and unfortunately a statue of former murderous dictator Chiang Kai Shek, which, needless to say, can be given a miss. From there the path continues down the other side of the cliff, over a suspension bridge and to the Changuang Temple (a beautiful temple in active use, which offers little to the visitor), from which it's possible to walk back along the road to Eternal Springs Shrine.


Swallow Grotto (燕子口, also known by its Chinese name 'Yanzikou', including on many bus timetables) is another route on the popular tourist trail, so again it pays to start as early as possible. This 1.3-kilometre trail runs along the old Central Cross-Island Highway through a series of tunnels, mostly directly above the Liwu River, to the Jhuilu Cliffs, which are truly an awe-inspiring sight. Efforts are being made to widen the road to create a separate (much needed) pathway for those on foot, and to accommodate the ever-increasing numbers of buses which ply this tiny mountain road.

Many of the tunnels don't have concreted tops, and rocks look like they are waiting to fall, so it's strongly recommended to pick up a hard hat from the park headquarters before doing this walk.

This beautiful hike was once the historic Cross-Hehuan Mountain Road. It offers stunning views of the Liwu River, interesting geological formations and a chance to see the rare Taiwan Oak tree.
Of the four main trails available without a permit, the Lushui Trail is my favourite. And it's often the quietest trail.

The Cross-Hehuan Mountain Road was the original road the Japanese built during their administration of Taiwan (1895 - 1945), mostly to subdue and control the Taroko (aboriginal) tribe, to enable them to better exploit this resource-rich area for wood (including camphor) and minerals. It later became a popular hiking route. While much of the old road was used to build the new Cross-Island Highway in the 1950s, this section has been very well preserved. This old memorial is for four Japanese who died on official business in the gorge.

The first two kilometres or so, known as the Lushui Trail, is mostly flat, and takes about an hour one-way. It can be easily reached from Tianxiang. Most hikers start from the Lushui end (two kilometres  from Tianxiang), and enter the trail beside the Geological Exhibition Hall. Opposite this is a small exhibition of photographs of the history of the Central Cross-Island Highway, which includes some English signage. An overpriced cafe and souvenir shop is located downstairs, and the Lushui Campground is attached.  The trail comes out near the Heliu Campground, from which it's worth making the short walk to the Yuefei Pagoda and crossing the suspension bridge to enjoy views of the Liwu River.

For four kilometres in the other direction is the Wenshan Trail, which terminates at the Wenshan bus stop, further inland from Tianxiang. This is a serious mountaineering trail, and should only be attempted by experience hikers who are suitably prepared for this terrain.

If you'll do the whole six kilometres, it's best to start at the Wenshan end, and then walk down. Either finish at Lushui, or continue on for the easier walk to Heliu. Then walk back to Tianxiang, or take the bus (from either place) back to Hualien.

During the 1980s the (state-owned) Taiwan Power Company (known as Taipower) planned a crazy hydroelectric power station, which would have drawn so much water from the gorge that it would have disrupted the natural flow of rocks and debris to the ocean, destroying the gorge as we know it. By the time the Taiwanese government of the day (then a one-party dictatorship) finally saw sense and canned the project, several new areas of the gorge had been opened up for surveying and construction, complete with vehicle-sized roads and tunnels, some of which became the Baiyang Waterfall Trail.

This very popular trail brings busloads of tourists right through the gorge. The two-kilometre path passes through several tunnels, with beautiful views, eventually reaching the "Water Curtain", where groundwater, disturbed by the drilling of tunnels after thousands of years, streams through cracks in the roof, forming a kind of a 'natural shower'. The construction of this tunnel has, however, made the ground unstable, and geologists from the park monitor the situation and restrict access accordingly. As of January, 2019, only the first Water Curtain is open, and I strongly recommend respecting this limit.

The Baiyang Waterfall Trail starts with a long tunnel off the main road near the far end of this rock shelter, about one kilometre west of Tianxiang. The carpark (which doubles as a free campground from 3:00PM - 10:00AM) is at the same end of the rock shelter (away from Tianxiang). If you are staying at Tianxiang and intend to walk this trail I recommend doing it as early as possible, ideally before the tourists and day-trippers arrive.

The information presented here is taken from the excellent 'Trails of Taroko book available from the Taroko Gorge Park Headquarters and Visitors Centre (NT$240).

I highly recommend spending a night or two in Tianxiang. If you're a serious hiker or cyclist, you may want to just crash at the Lushui Campground, the nicest in Taroko Gorge.