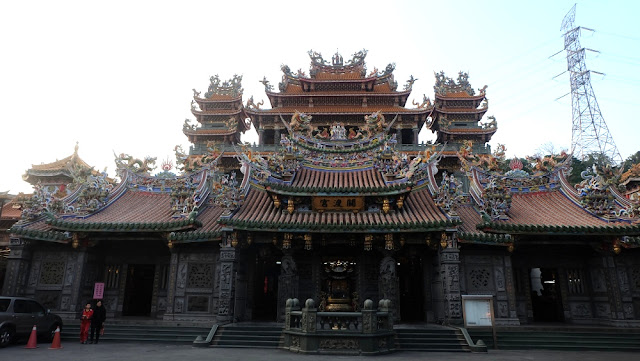 The Guandu Temple is one of Taipei's largest, oldest and certainly its most visually impressive temple. It's built right into a small mountain, which offers great views over the temple itself, the Tamsui River, and (on a fine day) the Taipei basin. It's also a less-crowded and more pleasant alternative to watching the famous sunset over the Tamsui river than Tamsui itself.

Guandu Temple was first built in 1661, at the end of the Dutch rule of Formosa (Taiwan), but has been reconstructed many times.  Being located by a small port (and now ferry terminal) its principle diety is Matsu (媽祖 , also Mazu), the Goddess of the sea, to whom fisherman and their wives pray for a large catch and a safe return. But of couse you can bai bai (bow and make a burnt offering) for the fish instead, or to request any other favour from the very busy goddess, who is forever roaming the seas helping those in need.

A small tunnel, protected by some fierce deities, leads through the mountain to a charming little altar with views over the Tamsui river. It's a stunningly photogenic spot, but is always crowded with a busy stream of worshippers, so please be discrete with photos, which are best taken from above the temple. Touch the stone sphere at the entrance to the tunnel to pick up some good luck and some friendly bacteria.

The temple is a one kilometre / ten minute walk from Guandu Station, three stops south of the Tamsui terminal.
It's possible to take a ferry from the nearby terminal back to Taipei (Dadaocheng Wharf), or on to Tamsui, but rides are expensive (about NT500 for Taipei to Tamsui), cannot be reserved online and only operate during weekends and holidays with good weather. I recommend taking the MRT just taking the ferry from Tamsui to Bali.