After Ershui, Jiji is the second most significant stop on the Jiji Small Railway, famous for its Japanese history, natural museum and one of Taiwan's most bizarre tourist attractions: a preserved, collapsed temple. 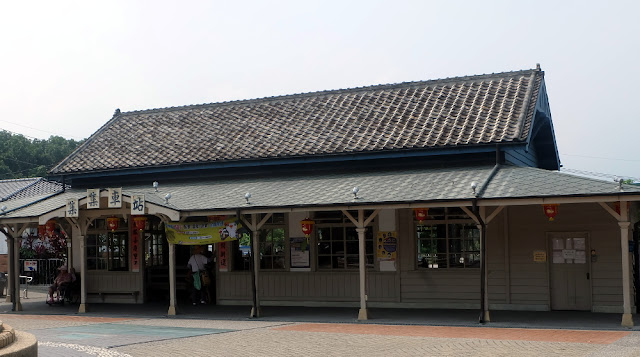 Jiji Station collapsed in the 9-21 Earthquake (1999) but it was rebuilt using the same Cypress structure but also reinforced with steel. In order to preserve its authenticity as much as possible, its roof tiles were replaced with others retrieved from collapsed Japanese buildings in the area. Along with the obligatory steam train, it's a popular 'selfie' spot.

Cycling and the Jiji Green Tunnel

Highway 152, popularly known as the Jiji Green Tunnel, is a famous cycling route owing to the Camphor trees which provide shade for most of the route. The story - which is probably true - is that the trees were planted by locals in the 1930s, and that they needed to water them every day with water from the lake. While the route is beautiful, it's still a busy road, with cars and trucks - and the inevitable scooters - zooming by. I recommend instead mostly cycling at Ershui, since its path is narrow and mostly used only by cyclists and local farmers on scooters. 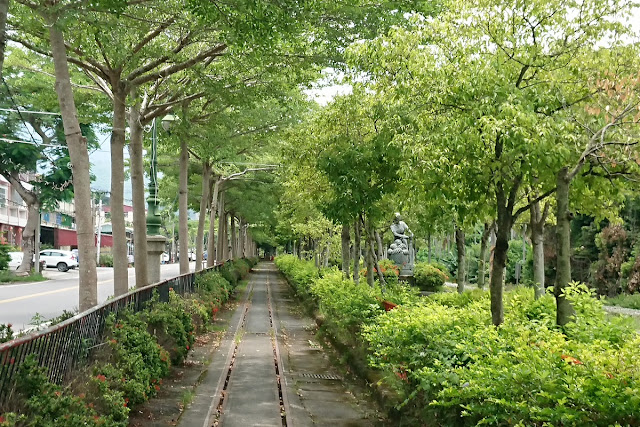 There is, however, a short and very pleasant two-kilometre route along the old train line, also covered with trees all along, connecting the Jiji Railway Station with the Endemic Species Research (see below). Towards the end of the path is an old Japanese train.  It also passes Junshi Park, on the other side of the road.

This research centre for endemic plant and animal species of Taiwan features a three-storey museum (the Conservation Education Centre, 保育教育館) is a great expose of the natural environment of Taiwan, and the problems it faces from such a large human population. Many of the three dimensional displays are similar to the National Taiwan Museum, with a much stronger environmental message. 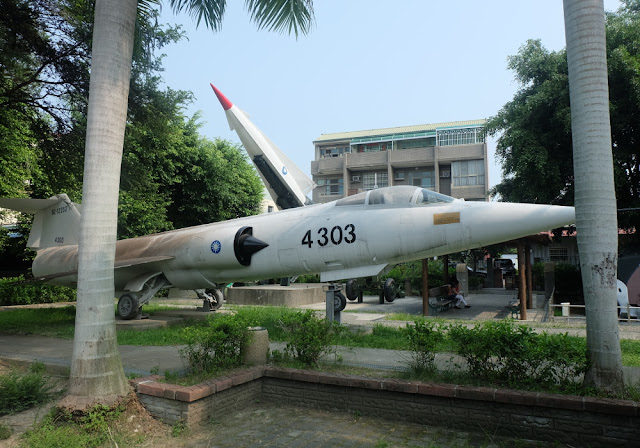 Perhaps the second most bizarre attraction in the area after the collapsed temple, this small park, which you'll pass on the way to the Endemic Species Research Institute, features an array of retired military equipment, including a fighter jet, anti-aircraft artillery and even an old C-119 cargo plane. I found the combination of a children's playground with military equipment somewhat disconcerting.
Open 24 hours; free


Arguably the most bizarre tourist attraction in Taiwan, Wuchang Temple collapsed during the 9-21 Earthquake in 1999, but only the lower floor gave way, leaving the upper floors mostly in tact. Rather than spend a fortune knocking it down (as my hometown of Christchurch spent years doing to its heritage buildings) the Jiji folk have cordoned the temple off and left it standing as a memorial to the earthquake.
The temple offers some great photo opportunities, but it's important not to get too close or stand under overhangs for obvious reasons. The broken beams and bent steel reinforcing and offer interesting insights into both construction of the temple and the power of the earthquake. By walking around the temple one can see how the upper floors have lurched forward, virtually breaking off and crushing the lower floor.
A new, elaborate temple complex has been constructed in front of the old one.
Minsheng Road, Lane 34, Number 89
民生路34巷89號

Jiji offers by far the best options to stay along the Jiji railway, with numerous guest houses and boutique hotels in Jiji which can be booked online (search for Nantou and choose the 'Map' function).


I particularly recommend the new and spotlessly clean Lu An Backpackers. Only dormitory beds are available, but they each have their own curtain and lockable storage, and the place has a great vibe. It's popular with touring cyclists.


This page contains an Affiliate Link. I partner with Agoda because, from years of experience, I find them to be the most reliable hotel booking engine, especially when things go wrong, which is when the traveller needs them the most. More information about my affiliate links with Agoda can be found in my About page.