Jinguashi(金瓜石) is a former gold and copper mining town about ten minutes by bus from Jiufen. It's famous for its mining history, its solid bronze statue of the Guang Gong god, the town's icon, and its Prisoner of War camp for captured allied soldiers during WWII. 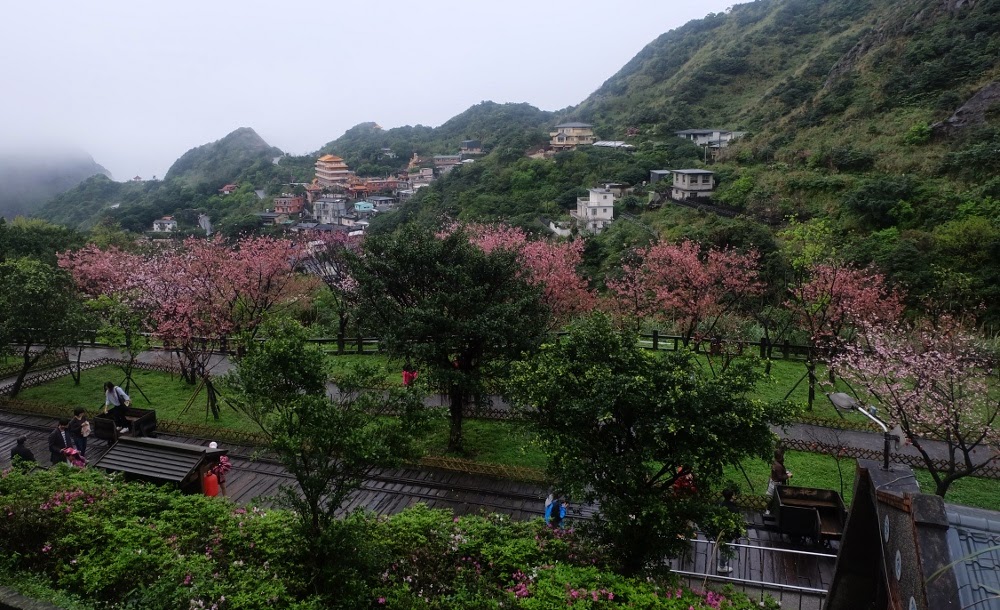 Jiinguashi is home to one of the world's largest gold and copper mines, with over six hundred kilometres of tunnels in the surrounding hills, mostly below sea level. Its history dates back to 1890, when gold was discovered in the Keelung river and traced back to Jiufen. It grew into the largest copper mine in the Japanese empire, but fell into decline after World War II, with mining ceasing altogether in the 1970s.


There are estimated to be eight million Oz of mine-able gold remaining, and with its increasing value and improved mining technology it's becoming economically feasible to restart mining operations, however the majority of the town's population don't wish to, as "tourism is their new gold", and with the beauty of this coastal area and its thriving tourism industry it's not hard to see why.

Jinguashi returned to fame along with Jiufen in the 1990s and early 2000s, and the mine and surrounding buildings were re-opened as the "Gold Ecological Park" (somewhat an oxymoron) was opened in 2004. Besides its history the whole area is very charming, especially during the sakura (cherry blossoms) season around February or March. The park entrance is just beside the bus stop.

The star attraction is the restored the Benshan Fifth Tunnel (gold mine), complete with model Taiwanese miners setting dynamite or enjoying lunch from their bentos (Japanese lunchboxes). While a little contrived, it offers a taste of what life was like for the hard-working miners who supplied much of the metals needed by the Japanese empire. The Gold Building is essentially a museum on the history of gold in Taiwan and around the world, and offers the chance to touch the world's largest gold ingot at 220kg. It's rumoured that if you can lift it (with one hand) you can take it home.

The site of former Japanese residences have been recently restored. Four adjoined residences, once lived in by mining managers and their families, have been recently opened to the public. As only a few can enter at a time, queue up just after entering the paid area of the park. Most are restored to their original Japanese style, however one has been restored to how it was after Chinese managers took over after World War II, most notably its Western beds. one  Visitors can also walk through the beautiful garden of (but not enter) the chateau purposely built for the expected visit of Crown Prince Hirohito (better known for his later contributions to history), a visit which never eventuated. The ruins of the former Jinguashi Shinto Shrine, a short walk up the mountain, offers good views over the surrounding bay on clear days. Many visitors bring a few Yen to make an offering at the (ruined) altar, a la Japan.

Admission: NT$80.
The Gold Building, and the Benshan Fifth Mine Tunnel:
Mon - Fri: 9:30-17:00.
Weekends and Holidays: 9:30-18:00.
They are closed on the first Monday of every month or the day after the holiday if the first Monday falls on a national holiday.

Despite the popularity of the Gold Ecological Park the rest of Jinguashi is surprisingly devoid of tourists, so its streets (including the historic Qitang Old Street) offer a much more authentic glimpse into Taiwan's past than the usually-overcrowded Jiufen up the road.

This charming old street and surroundings was once considered a "Little Ginza" from the wealth of the area. (Ginza is traditionally Tokyo's most posh shopping district".) It hasn't kept up with its Japanese counterpart, but it's well worth a stroll around the old streets, which don't appear to have changed much since their golden days, which unfortunately means there is little to see here.

One of the darker aspects of Jinguashi's history is Kinkaseki (the Japanese pronunciation of Jinguashi), a Prisoner of War camp, where over 1100 Allied soldiers, mostly captured in Southeast Asia, were forced deep into the mines to carry out work considered too dangerous or unpleasant for Taiwanese or Japanese miners. Conditions were similar to the infamous Death Railroad in Thailand and Burma, and prisoners were beaten with mining equipment if they couldn't complete their allocated tasks. Many died from malnutrition and preventable diseases. The memorial was erected in 1997.

Sitting on top of this temple, first built in 1896, is a 25-tonne solid copper, and gold-faced statue of the Guan Gong god, which looks out over Jinguashi, the gold park and the Northeast Coast. It's possible to walk up through the temple to the base of the statue, but it's important to respect that this is a sacred place of worship, not a tourist attraction. 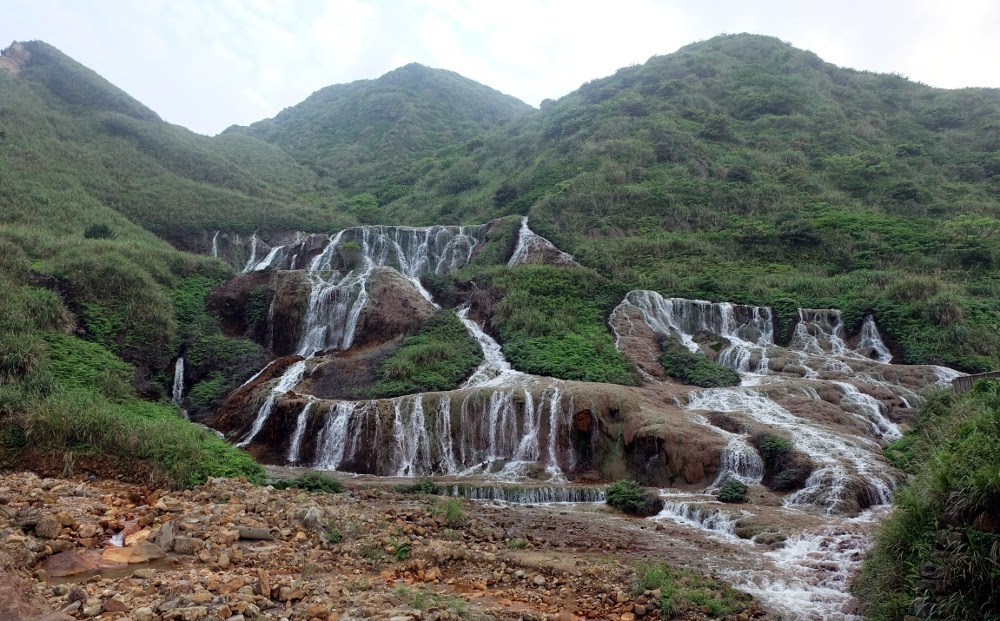 A short walk down from the Cyuanji Temple is the Golden Waterfall. The water collects a brownish hue from heavy metals (but not much gold) in the ground.


Remains of the Thirteen Levels (十三層遺址) Officially known as the Shuinandong Smelter, this abandoned thirteen-story smelter is famous for its industrial dystopian awe, for which it's been used as a backdrop for several movies. It's possible to walk down to the roof of the smelter from behind the Cyanji Temple, however it's best viewed from the coast (also walk-able from Jinguashi, a little past the Golden Waterfall, but easier with private transport). The crisscrossing Changren Flue Pipes carried smoke and fumes to the top of the mountain, and are believed to be the longest chimneys in the world. It's not safe to enter any of the buildings or the chimneys.

Jinguashi is best visited as a side-trip from Jiufen (transport). It's ten minutes by bus (number 788, every fifteen minutes) from the busy bus stop outside Jiufen Old Street. It's easily visitable at any time, but usually more crowded during the weekends as families flock from Taipei.

The shuttle bus from the carpark outside the entrance to the Gold Ecological Park takes visitors along the uncomfortable journey to the waterfall and the remains of the thirteen levels. The same shuttle goes back to Jiufen (if you dare to try the crowds) and then all the way back to Riufang Station.

The vast majority of visitors to the area choose to stay in Jiufen for the experience, which I do recommend. However it is possible to stay in Jinguashi for a quieter stay. The most popular place online is Golden 101 Bed and Breakfast. It's right beside Qitang Old Street, a short walk from the Gold Ecological Park, and gets great reviews. If you will spend a two nights in the area I recommend one in Jiufen and one here.