Tainan is Taiwan's oldest city and ancient capital, and is packed with historic sites to explore. Like it's big sister Kaohsiung, Tainan also boasts a surprisingly different culture to northern Taiwan, which retains much more of a traditional Taiwanese vibe, as Chiang Kai Shek and his Chinese soldiers mostly settled in Taipei. Even the language is different here: while Chinese is used in formal situations, the majority of people down here speak their native Taiwanese (or aboriginal languages) by preference. While Taipeiers flock to Starbucks and work on their laptops, or parks to catch Pokemon, southerners sip fine Alishan tea in quaint teahouses, or go to the centuries-old temples to worship. Welcome to the real Taiwan.

Tainan was first established by the Dutch (the first to colonise Taiwan) in 1624, and many of the historic sites date back to this time, however most have been restored in recent decades. The Dutch were evicted by Koxina, a Ming Dynasty loyalist, in 1662, who, much like Chiang Kai Shek three hundred years later, ruled the island as an outpost of his lost Chinese empire. Tainan remained the capital city of Taiwan until the Qing Dynasty incorporated Taiwan as a province in 1885, ten years before ceding Taiwan to Japan in the Treaty of Shimonoseki.
As Tainan was the main city developed by the Dutch colonisers, the Ming Dynasty and the Qing Dynasty, Tainan is the only city in Taiwan in which most historical sights are not leftover from Taiwan's period of Japanese rule from 1895 - 1945.

The majority of visitors to Taiwan visit Taipei, Jiufen, and Taroko Gorge, perhaps stopping off at Jiaoxi for a hot spring on the way. Chinese visitors usually also visit Alishan Mountain and Sun Moon Lake. Few people make it to the south, which is a pity as it's such an eye-opener into Taiwan's long history.

The downsides to Tainan are the distance and the heat: while it's a nice escape from the cold north in the winter time, summer averages regularly reach over thirty degrees, so be prepared for harsh sun and hot weather.
Prices in southern Taiwan are much lower, especially accommodation. While a double bed in a basic hotel is difficult to find for under NT2,000 in greater Taipei, half that will get a clean, pleasant room in Tainan or elsewhere in Southern Taiwan.

Getting to Tainan from Taipei

The best way to reach Tainan, on balance of time, convenience and cost, is the Tze Chiang (express) conventional train (not the high speed rail). However it's usually necessary to reserve a seat at least a day or two in advance, or more during weekends or busy periods. It may not be possible to get a seat at all during Chinese New Year or other national holidays. The Puyuma Express is an especially fast and comfortable train which costs the same as the regular Tze Chiang but does the route in three hours, however there are only a few trains per day, and these usually sell out well in advance.

Significant discounts (up to 35%) can be had by reserving tickets online. For more details see Formosa Guide on Intercity Travel in Taiwan. 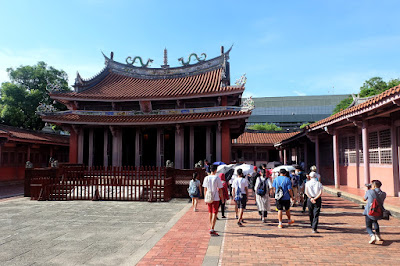 This is the oldest and most significant Confucius Temple in Taiwan, however the Taipei Confucius Temple is comparable in size, and offers a free "4-D Theatre" on the teachings of the life of the father of Chinese Philosophy. There's less to see at this temple, however there are a few bilingual exhibits of the history of the temple, and some Chinese musical instruments which date back to the eighteenth century. The temple is housed in a beautiful park, which is home to one of the largest Banyan trees in Taiwan, and appears to be more popular with locals than the temple itself.


Across the street from the temple is an arch which was built in 1777. A few minutes' walk to the West of the temple, on You'Ai Street, is the Tainan Old Martial Arts academy, one of the most grand old traditional Japanese buildings in Tainan. The original building was built in 1910 as a martial arts training centre for police. It was re-built in its current location in 1936, however the current building is made of reinforced concrete, while the original was made entirely of wood in the traditional Japanese style. Unfortunately the building is not open to the public.
Source: this excellent Tainan City Guide 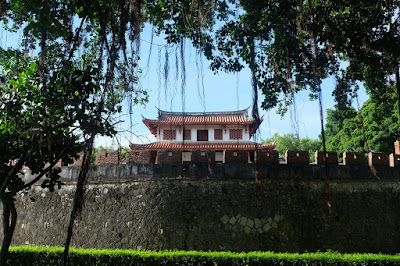 One of the few remaining parts of the old city wall, which was built during the 18th
century, this restored monument lies in a beautiful park. There's not a lot to see or do here, but it offers a glimpse at what the old Qing Dynasty city might have looked like. It's well worth the short walk from the Confucius Temple to get here. 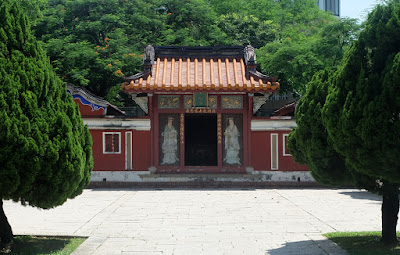 In 1683 the Ming Dynasty's exile in Taiwan officially ended when Koxinga's grandson, Zheng Keshuan, surrendered to the Qing Dynasty. Zhu Shugui (朱術桂), the last of the Ming dynastic line, committed suicide (probably in preference to being captured and executed by the Ming forces). But before he did he urged his five concubines to run away to a nunnery and live out the rest of their lives in peace. But the concubines, who "understood the principles or righteousness" (according to a sign at the temple) refused, and instead hanged themselves at what's now the city's Matsu Temple. The grave of the five concubines, covered in cement, is just behind the temple.

The grave and temple have an interesting history of respect among different conquerers. Despite being their conquerers, an official from the Qing Dynasty found the tomb abandoned in 1746, and ordered to have it repaired and a new tombstone erected. Then in 1927 Akie Muroto, head of the Patriotic Woman's Association of Japan, promoted further reparation of the temple, and the county magistrate of Tainan composed the Epitah as it is today.

This old Dutch fort is one of Tainan's top tourist attractions, and also a popular hangout spot on fine weekend evenings, when the the area comes alive with concerts and vendors in the surrounding streets. The tower was built as Fort Provintia in 1653 to strengthen the Dutch control of the region (after the establishment of Fort Zeelandia) and has seen Dutch, Ming, Qing, Japanese and Chinese Nationalist masters in its long history watching over Tainan City. The fort collapsed during an earthquake in the nineteenth century, and was then re-built as Chikhan towers.

Outside the towers are nine stone turtles with tablets on their backs which were carved in China during the Qing Dynasty. The tower has been beautifully restored, and offers some nice views over the surrounding suburbs, but there's more to see and do at the larger Anping Fort.


The foundations of this larger, more strategic fort were first laid by the Dutch colonisers of Taiwan upon their arrival in the 1620s, and it soon became the centre of Dutch power in the region, as it allowed them to maintain their control of their trade through the Tainan harbour. The fort was built of bricks which were brought from Java, and the mortar was made from sand, ground seashells, sugar and glutinous rice. In 1661, after a nine-month siege, the Dutch surrendered to Koxina, a Ming Dynasty Loyalist who fled to Taiwan in the hope of using it as a base to amass an army and re-take China (from the new Qing Dynasty). In 1897 the new Japanese administration demolished much of the towers to build a house for the customs officer and dormitory for customs workers, however its importance waned with the growth of Taipei (and its ports at Tamsui and Keelung). In the 1930s the Japanese government recognised its historic importance and began excavations and restoration work on the site. This was finished under the Republic of China Government throughout the second half of last century. The statue of the "national hero" Koxinga (for overthrowing the Dutch) was added in 1978. 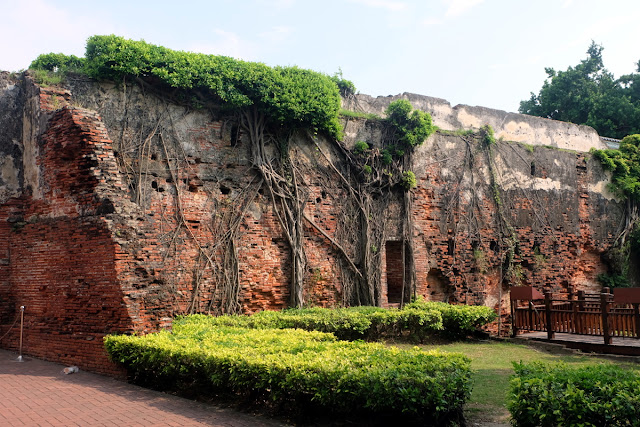 The tower itself includes several bilingual exhibits, including an early cannon and weapons dating back to the Dutch period (seventeenth century). The recently-added lookout tower offers excellent views of Tainan City and the surrounding harbour, and the brick walls (which were mostly restored by Japanese a century ago) make excellent photographic opportunities. 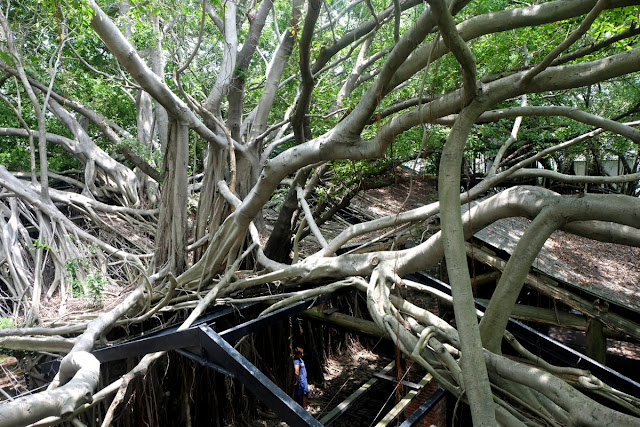 This house, built in 1867, was once the centre of Old Tait & Co, the large British trading company which dealt in tea, camphor and opium. After China ceded Taiwan to Japan in 1895 the Japanese government used the house as a centre for the Taiwan salt company. The building has been well preserved, and contains a few bilingual exhibits, including some old artifacts from the Dutch and Japanese eras.

But the main drawcard here is the Anping Tree House, the former warehouse of Tait & Co and the salt company, which was left abandoned after the collapse of the salt industry after World War II. Large Banyan trees have completely taken over the buildings, creating some great photo opportunities with roots and trunks of trees growing all over the framing of these old buildings. They have also been well preserved, with stairs and raised walkways set up to see the overgrown warehouses from all angles.

This fort, which goes by many names, was built by the Qing Dynasty government in 1876 to defend Taiwan from what was perceived to be a growing threat to Taiwan by the Japanese. It was used in the Sino-French war of 1884, and then a year later when the Qing Dynasty ceded Taiwan to Japan in the treaty of Shimonoseki Taiwanese forces from the Republic of Formosa (Taiwan's short-lived republic assembled to resist the Japanese invasion) fought unsuccessfully from this fort. Once the Japanese had taken control of Taiwan the fort was of little value, so the government removed many of the cannons and it fell into disrepair. The site has been fairly well restored, but in my experience the site feels as fake as the "replica" cannons, which have been set up to add to its value as a tourist attraction. It's worth a visit for anyone interested in military history, but Hobe Fort near Tamsui (Taipei) is much more authentic, since it was never used in war.