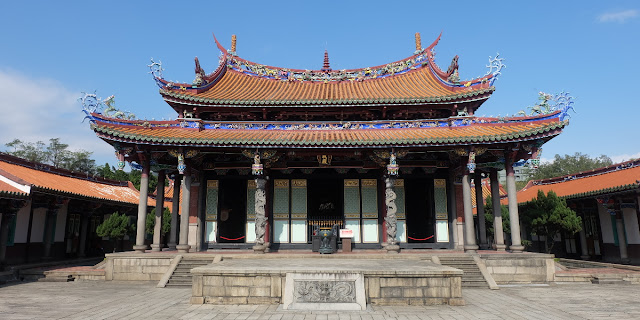 While the Taiwan Confucius temple in Tainan is larger and more historically significant, the Taipei Confucius Temple is one of Taipei's most interesting temples to visit, especially for children. Within the temple grounds is an entertaining "4-D Theatre", which shows a range documentaries about Confucius and the history of the temple, including its destruction under the Japanese and re-build (also curiously under the Japanese). I'll leave the "4-D" part as a surprise, except to say that it's probably not suitable for anyone with epilepsy. The films are around fifteen minutes long, and are shown two at a time with a break in between.

Confucius (551 - 479 BC) is one of China's most influential thinkers of all time, and like the more recent Sun Yat Sen, he is revered in both China and Taiwan. There is much debate about whether whether Confucianism is a religion or an ethical philosophy, but either way he's effectively deified in popular culture.

Confucius promoted the importance of education, and many crowded urban schools in Taiwan reserve the best of their precious-little outdoor space for a statue of him. He also places great importance on political and social harmony and the family unit. While it's been great for the stability of China over the milenai since his life, it doesn't work so well in business and industry, since it constrains workers to their place in a hierachy, and its less importance of Confucianism is one reason suggested why Japan is economically more successful than China, Korea and Taiwan. Neither does it work in the cockpit, and there have been accidents in which the co-pilots have admitted afterwards that they knew something was critically wrong but felt uncomfortable telling the pilot (their senior) that they'd done something wrong, resulting in accidents. Korean airlines solved the problem by making pilots speak English in the cockpit.