Tamsui (淡水, literally fresh water after the river, previously Danshui and Tamshui) has been a major port of Taiwan for centuries, during which time it has seen Spanish, Dutch, Qing, Japanese and of course Chinese rulers, and the battles which saw the transitions and expulsions. Since the opening of the Tamsui MRT in 1997 (which was actually just the re-opening of the Japanese railyway line from a century earlier) it's become a popular escape from Taipei and an important tourist spot. People come to visit the For Santo Domingo, the originally Dutch-gone-Spanish-gone-British castle, to walk the old street along the harbour and most importantly to try to catch the elusive sunset over the Taiwan Strait.

Of all common tourist outings in and around Taipei, Tamsui is probably the most dependent on weather and crowds. If Tamsui is a priority for your trip it's worth planning your days in Taipei around it. For Santo Domingo is closed on Mondays.


If you are able to visit Tamsui at the right time, when it's not too hot, cold, wet, cloudy or crowded, it may be a highlight of your visit. You could easily spend an afternoon exploring the fort, walking the old street and waterfront, taking the ferry to Bali and cycling there, and finally watching the famous sunset. Without the cycling it could easily be combined with a trip to Beitou. The best times to visit Tamsui are on a fine weekday during the spring, autumn or even a sunny day during winter.

Tamsui,like nearby Beitou, was originally settled by Ketagalan Aboriginals, and like all aboriginal tribes in Taiwan they date back so far no one knows when they arrived or where they came from. The Spanish arrived in 1629 to use it as a base for their colonisation of the Philippines and trade with China and Japan. In 1641 the Spanish were driven out by the Dutch, who were already settled in present-day Tanian. The Dutch encouraged migration from China and developed the area to produce raw materials (including sulphur from Beitou).

In 1661 the Dutch were defeated by Koxina, a loyalist to the Ming Dynasty who intended to use Taiwan as a base to amass an army and return to China to defeat the new Qing Dynasty, very much like Chiang Kai Shek and his Chinese Nationalist Party three centuries later (neither even made it back to China, let alone re-captured it). In 1862 the Qing government opened Tamsui to foreign trade, and it quickly grew a large foreign population. The Fort Santo Domingo became a British Embassy, which it remained as until the British cut diplomatic relations with the Republic of China in 1972 (except for a short closure during World War II). By the time the Japanese took over Taiwan in 1895 the build-up of silt in the Tamsui river limited its suitability as a port, so Keelung took over this role and Tamsui was reverted to an agricultural town. After the handover to Chiang Kai Shek after World War II Tamsui became a sleepy fishing town until the opening of the MRT in 1997, from which point it grew quickly into the tourist attraction it is today. The MRT has also made it in increasingly popular residential area, with fresh air, open spaces and cheaper apartments than in Taipei City.

Tamsui's main historical site has been well maintained and preserved since the British departed. Most exhibits are from its most recent era as the British Embassy, many of them quite recent (almost like walking into a time capsule from the 1980s) and it feels very much like an upper class English home. Due to the small rooms they need to limit the number of visitors at a time, so it may be necessary to wait, though I don't recommend visiting Tamsui at all during the weekend.

Tamsui old street is really just that (an old street) and doesn't compare in atmosphere or interesting sights to other 'old streets' in Taiwan, which are generally cultural and historical treasures. I recommend walking along the waterfront (which runs parallel to the old street, one block away) to the pier and then taking the ferry to Bali. The street is filled with snack vendors and a few overpriced souvenir shops. Further down (north of Tamsui Station, towards the fort) are even more overpriced coffee shops and restaurants (and a Starbucks). 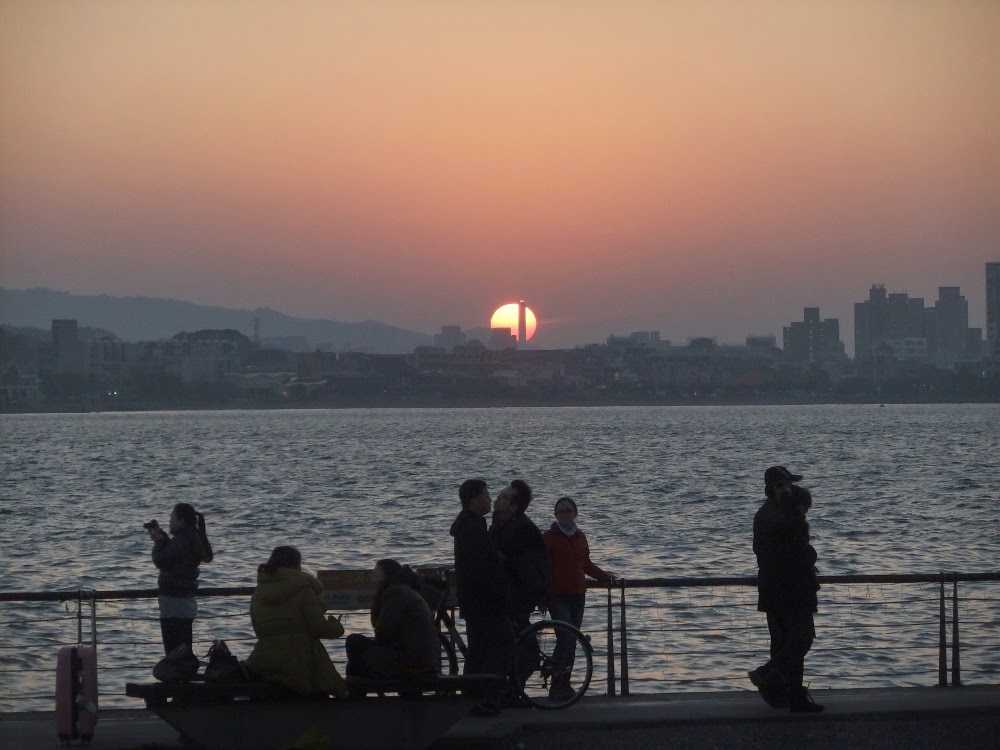 People, especially young couples from Tamui's three universities, love to catch the sunset over the Taiwan Strait. It is a beautiful sight, but you'll do exceptionally well to catch it if you're only here for a few days. Consider as an alternative watching it set from the Guandu Temple (post coming soon). Beware that it's not particularly good for your eyes - or your camera - to look at or photograph the sun, especially while it's still quite high. I was quite shocked to see people looking at it and cameras pointed when it was still uncomfortably bright. 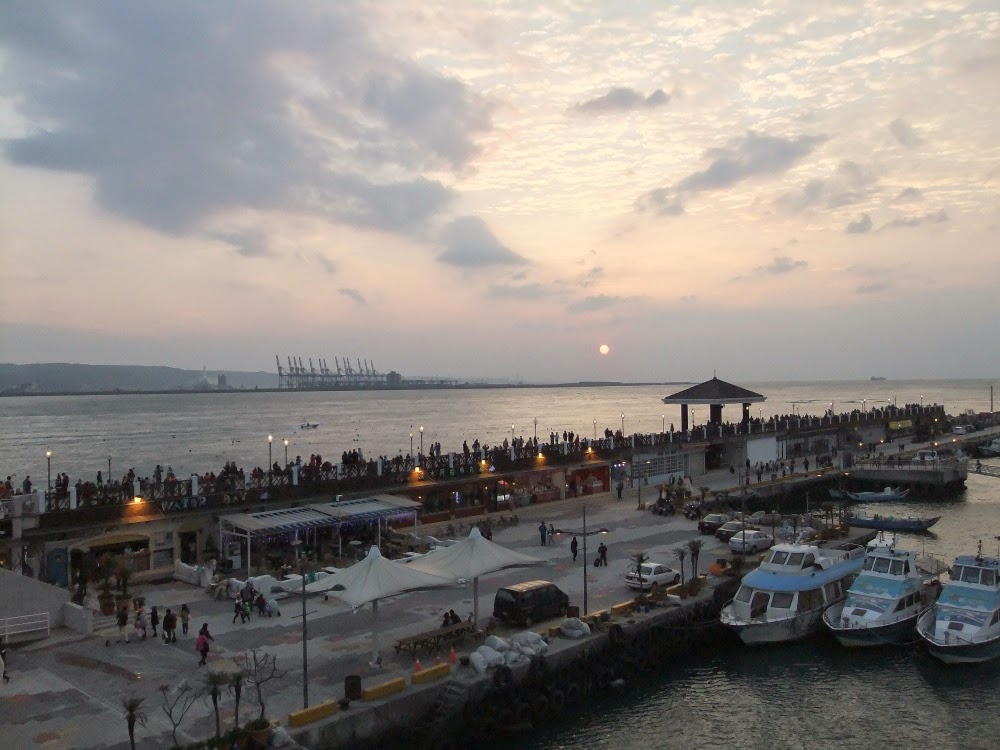 This old fishing port, while still in use for its namesake purpose, has been done up into a swanky new seafront popular for drinking, parties and seafood. The Lovers Bridge (named for its popularity for couples and its February 14th origin - and the wharf itself are also popular spots to watch the sunset.


The Lovers Tower takes people up for a view over Tamsui for about 200NT (with slight discounts during weekdays and for Easycard use).

It's a reasonably pleasant four kilometre walk from Tamsui, and has a bike path for much of the way, and bicycle parking spaces at the wharf. Alternatively take Red bus 26 (紅26) from outside Tamsui Station. It's a pleasant end to a day in Tamsui, but if you must leave one item off your Tamsui itinerary, I recommend it be this (as opposed to the fort, Tamsui or Bali). 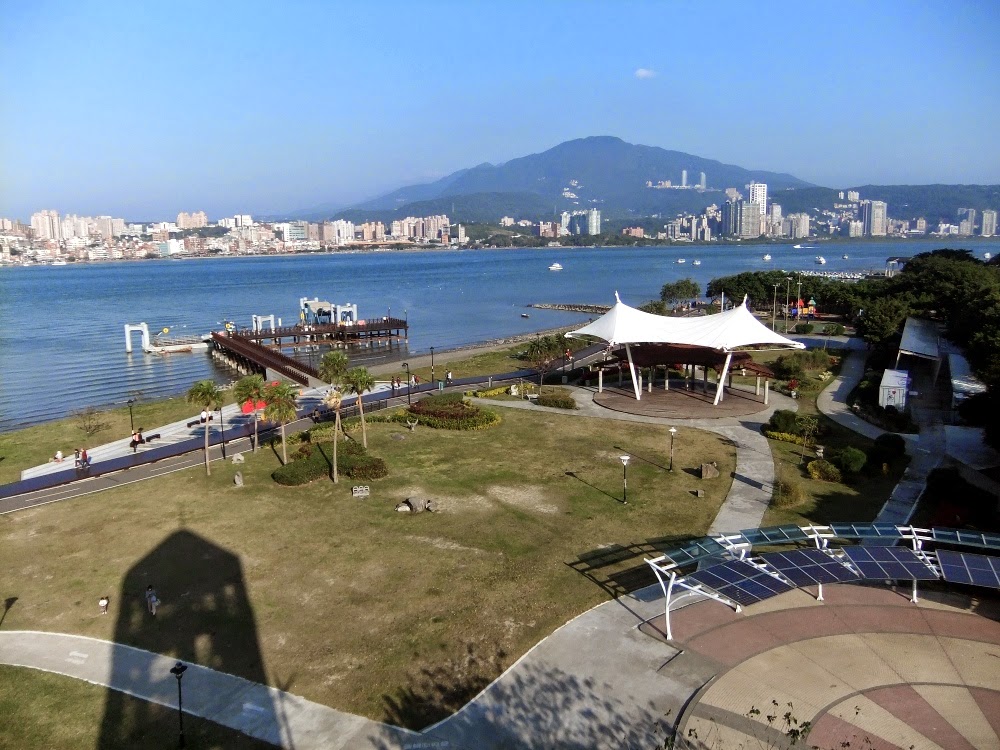 Bali is a small town directly across the Tamsui River. It's slightly less croweded than Tamsui and offers beautiful views of the river, Tamsui and Yangmingshan Mountain (behind Tamsui), but it's otherwise similar in character and feel to Tamsui. The main attraction is the Left Bank Park, which is (strangely enough) on the left bank of the Tamsui River, or to the right as you enter Bali from the ferry terminal. 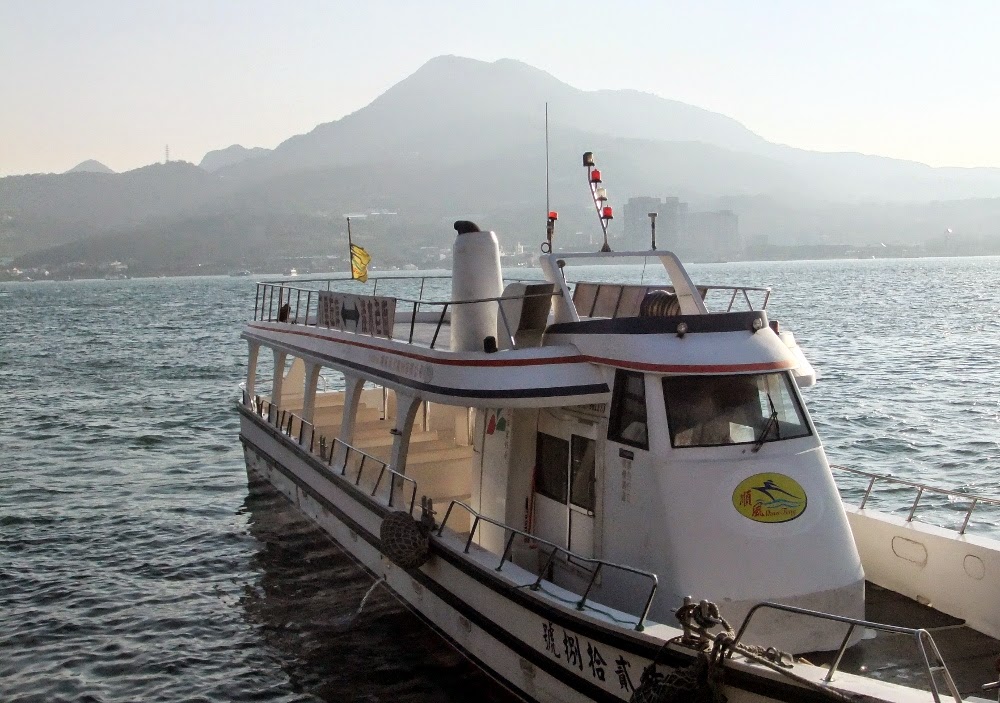 It takes the small ferry about ten minutes to carry about a hundred passengers across from the pier at Fisherman's Wharf.  Ferries leaves when full, but you're unlikely to need to wait long. A return ticket costs 45NT. It's possible to take bicycles, but unless you're bringing your own it would be easier to hire a bike there.

Cycling has long been a popular activity in and around Tamsui. While various options are outlined below, if you would like to fit some cycling into a full day exploring Tamsui and perhaps Beitou I recommend reaching Tamsui by MRT, taking the ferry to Bali (after seeing the Fort) and just hiring bikes for a short ride around Bali. If you'd like to do a long riverside cycling trip I recommend riding from (Bitan, outside Xindian Station) to Taipei on a Youbike, as the beautiful ride is almost entirely along a dedicated cycle path beside the Xindian river. It's particularly beautiful at dusk when people congregate, play music and dance along the riverside, particularly closer to Taipei.

Tandem bikes and group pedal-powered carts can be fun for group bonding, but are much slower than individual bikes, even if everyone pulls their weight. Also note that the carts can be difficult to control, so I recommend not riding them off dedicated bike paths, and certainly not anywhere near the road.

It's possible to cycle to Tamsui from Taipei, mostly along a bike path but it requires some tricky turns to cross the Keelung river (really requiring Google Maps) and at times the path is shared with a road, so it's not uncommon to encounter a speeding car on what you thought was a cycle path. Note also that the nearest Youbike stand is near Fuxinggang Station, so if you want to ride to Tamsui from Taipei (as many people do) you'll need to ride back five stations to deliver your bike before taking the MRT back to Taipei. It's also possible to hire bikes from private vendors south of Tamsui and drop them off in Tamsui. For a really long cycling trip ride from Xindian (see first paragraph) to Tamsui, but allow plenty of time and carry snack food.

In October 2015 a Youbike Station has finally opened in Tamsui. While the hire companies offer a larger range of bikes, and are cheaper for longer periods (generally starting at around NT100 per day) it's now easier than ever to jump on a bike and start riding. The Youbike Station is in the courtyard across the road north of the station, beside the old Japanese train.


A dedicated cycle lane runs from the landmark Guandu Bridge (near Zhuwei Station, two stops south of Tamsui) to Tamsui and to Bali on the opposite side of the river. So it's possible to bring your bike to Zhuwei Station, cycle to Tamsui Ferry Terminal at Fisherman's Wharf, take your bicycle on the ferry (25NT), ride back to and over the Guandu Bridge, which has a dedicated cycle lane.

Note that Guandu, Zhuwei and Hongshulin Stations are the only ones in the area that bicycles are allowed to be brought onto the MRT (Tamsui Station is usually crowded enough without bicycles). So if you bring your own bicycle you'll need to get off at Hongshulin Station.

Most people visit Beitou and Tamsui as a day trip from Taipei, however there are a few hotels hotels around if you want to relax after watching the sunset or get up early to watch the beautiful sunrise over the harbour. For more luxury consider spending the night at a hotspring hotel in Beitou.

Tamsui is the namesake and last stop on the red Tamsui Line. It takes about 40 minutes from Taipei Main Station. It gets very crowded on weekends and seats are usually taken by the time trains leave Tamsui Station.

There are lockers available at Tamsui Station.