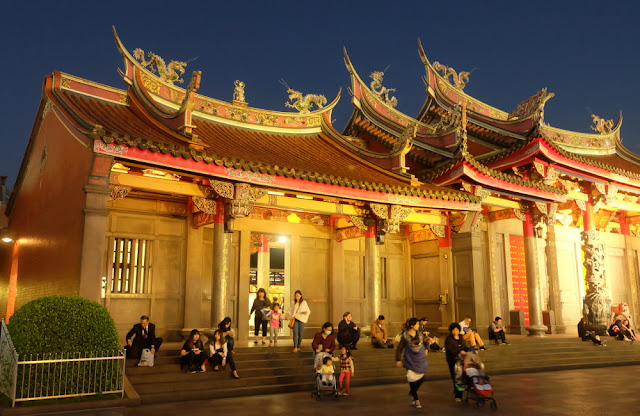 The Xingtian Temple (also Hsing Tian Kong) was built in 1967, making it one of Taipei's newest temples. It's main deity is Guan Gong (關羽, also Guan Yu), the patron god of businessmen, so this temple is particular popular with younger Taipei office workers who come to bai bai (worship) after work.

What makes the Xingtian Temple unique is that it forbids the burning of ghost money (fake money believed to help ancestors in the afterlife, also called spirit money), inviting its ten thousand worshippers daily to pay tribute with their hearts instead. Financial implications for the ancestors aside, this creates a much healthier temple atmosphere, since much of the bright red paint used on the fake money elsewhere is believed to be made with toxic lead compounds. Burning the cheaply made paper also releases a cocktail of carcinogens, including benzene, poisoning the young for the supposed benefit of the deceased.

Previous attempts to reduce the environmental harm from the burning of 100,000 tonnes of ghost money burned annually included local government offers to collect the ghost money from citizens and burn it on their behalf in special, eco-friendly incinerators, and even a system set up for "virtual ghost money burning" online.