Yingge and Sansia are two neighbouring craft villages which have reinvented themselves as tourist attractions. Sansia is most famous for wood carving, and Yingge for ceramics, but both sell ceramics, wood carving and usual tourist paraphanelia typical of Taiwanese tourist streets. Together they make a good day's outing, especially for anyone interested in ceramics. 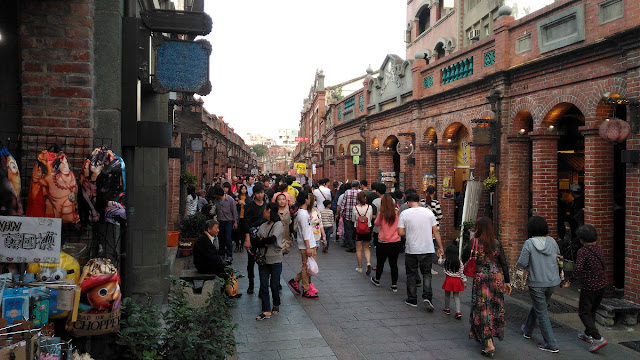 Sansia Old Street is a well-preserved commercial street from the early 1900s. At that time Japan was heavily investing in Taiwan, of which it had just taken possession from China under the Treaty of Shimonoseki. The economy was developing rapidly, and due to its strategic location at the confluence of three rivers (the town's name literally means "triangular surge") Sansia was a trade and production powerhouse. It's one of the longest and best-preserved old streets in Taiwan, and the buildings are built in a typical Baroque colonial style. The old street was restored in 2007.


If you are interested in ceramics Yingge should be high up on your bucket list. Legend holds that Yingge's ceramics industry began over two hundred years ago, when potter Wu An (吳鞍) travelled from Guanzhou in China to Yingge, kick-starting an industry which is still thriving today, with over eight hundred pottery-related businesses in the town. Like neighbouring Sansia 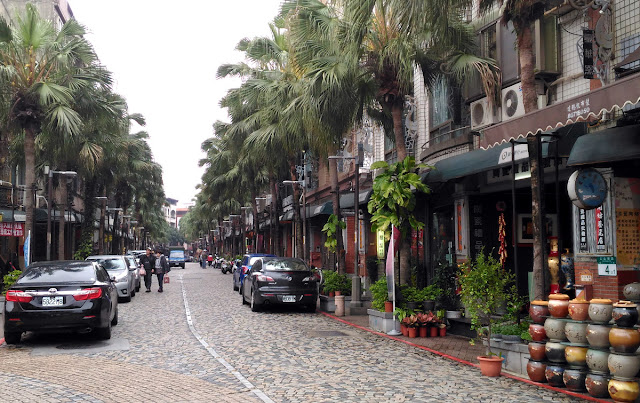 Compared with neighbouring Sansia, Yingge Ceramics Street (also Yingge Old Street) is architecturally disappointing, as its traditional colonial-era buildings weren't preserved, so most of the street is liked with recent Chinese-style concrete buildings, and the fake (modern) cobblestone road doesn't really work to create any authentic vibe. The streets are lined with pottery and other craft stores. If you would like to stock up on local gifts to take home Yingge is a great place for it, however care must be taken with purchases, as while some of the pottery is world class, much of it is cheap Chinese imports.
The street is about seven minutes' walk (five hundred metres) from both Yingge Station and Yinge Ceramics Museum (below). 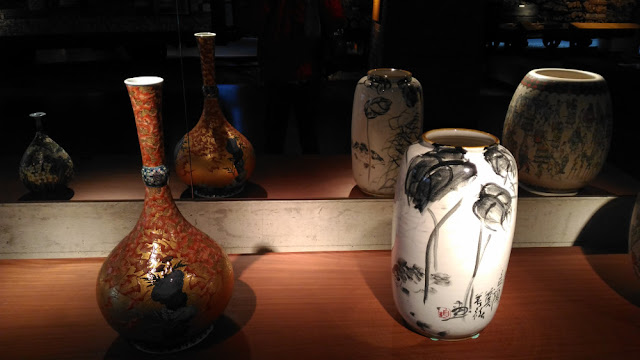 This entertaining museum is dedicated to showcasing and preserving Taiwan's ceramics industry, past, present and predictions for the future. The museum  also houses a small pottery studio, which offers DIY workshops for children. It also showcases local and international artists' work. Signs are all bilingual and audio guides are available.


Parrot Rock (莺歌石)
Yingee's name, literally, Parrot Song, derives from a supposedly parrot-shaped rock, which is a short and reasonably pleasant hike about ten minutes north of the city. Legend has it that the rock, which had gone by many names related to its apparent parrot-like appearance, produced a miasma, which was lifted when General Koxinga (a Ming-dynasty loyalist who fled to Taiwan in 1661 in attempt to amass an army to re-establish the Ming Dynasty in China, much like the KMT of today) ordered his canons to shoot it. Most of the view of the city of covered by trees, but glimpses of the setting sun can be seen from a few places. Behind the parrot rock the train becomes steeper, and is assisted by ropes. The path (especially beyond the parrot rock) should not be attempted during or after heavy rain.

Like most old streets in Taiwan, Sansia and Yingge come alive during the weekend, when Taipeiers flock to experiences towns from times gone by. During Chinese New Year and public holidays, however, Yingge and Sansia can become unbearably crowded, so it's best to come on ordinary weekends with fine weather.

The simplest but least interesting way to reach both towns is by train to Yingge and a taxi (five to ten minutes) to Sansia Old Street and then return the same way.

Yingge is a stop on the main Western Trunk line (from Taipei to Kaohsiung), and is usually a little under half an hour by local train from Taipei Main Station (not all express trains stop in Yingge). The museum, old street (Ceramics Street) and Yingge Station are all about ten minutes from each other on foot.

Sansia can be reached by bus from Dingpu Station, on the blue MRT line.  Take bus 705 to 新社區 (about forty minutes) and then walk across the river to Sansia Old Street (about ten minutes).

Youbike offers a fairly easy and certainly affordable way to see these towns. It's about a three-kilometre ride between Sansia Old Street and the Yingge Ceramics Museum. It's also possible to ride to Sansia all the way from Dingpu Station, but it's a seven-kilometre ride, much of it along main roads with lots of traffic.