Unfortunately, the Taoyuan Shinto Shrine is closed indefinitely for renovations. Please do not visit. For alternatives, please see my page on Japanese Historical Sites in Taiwan.

The Taoyuan Shrine is the best-preserved Shinto Shrine outside of Japan, and it has recently undergone restoration. While the torii (ceremonial entranceway) is new, the rest of the complex is mostly original. The shrine can be reached by bus from Taipei or Taoyuan Train Station (not the high speed train station) and could easily be visited after arrival or before departing from the nearby Taipei Taoyuan International Airport (TPE). 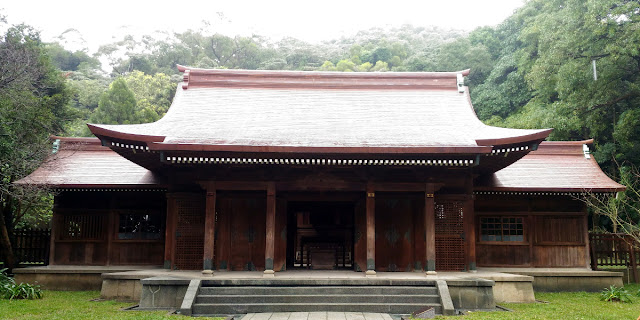 The Taoyuan Jinja (shrine) was constructed in 1938, at which time the Japanese government were working to increase the growing sense of Japanese identity among Taiwanese; two hundred shrines were built all over Tawan. After the Japanese defeat and the takeover of Taiwan by the Chinese Nationalist Party (KMT) dictator Chiang Kao Shek undertook drastic attemps to 're-sinicise' the population, who by that time mostly identified as Japanese (and many elderly who lived though that era still do). All Shinto Shrines were ordered to be torn down or converted into Chinese (ROC) martyr's shrines. The beautiful Taipei Grand Shrine was replaced with the Grand Hotel in Shilin, however the copper bulls from its entrance now sit outside the National Taiwan Museum.


It was a fortunate accident of history that the Taoyuan County Government lacked the funds to 'convert' this shrine, so they simply set up an altar in one room of the shrine's administration office as the Martyr's Shrine and adjacent to the temple itself, placed a Chinese god inside the Honden (the innermost hall, and traditional home of the Japanese kami / god) as a token of its conversion to a Chinese shrine, and left the rest of the complex mostly in tact. In the 1980s there were further calls to have it demolished, but academics and other citizens campaigned for its preservation as an example of architecture from this era of Taiwan's history.

The shrine complex appears to have seen just the right amount of maintenance: enough to prevent it from becoming totally overgrown, but little enough that the original structures still remain, albeit in a somewhat dilapidated form. It's a testimony to the quality of the Japanese construction that it's survived over seventy years with minimal maintenance, yet all the buildings are still structurally sound.

From around the 1980s, as Taiwan transitioned from a Chinese dictatorship to the free democracy it is today, people began to re-connect with their Japanese history, and there has been a resurgence in interest in sites leftover from this era, perhaps most significantly the historic mining towns of Jiufen and Jinguashi. Taoyuan Shrine was classified as an historic site in 1994, and the reconstruction of the torii implicitly confirms its existence as a Shinto Shrine rather than a Chinese Martyr's Shrine. 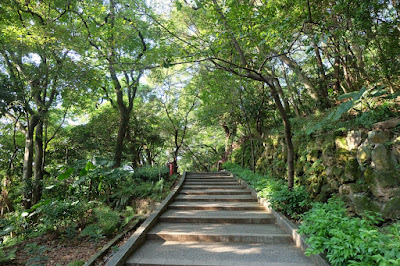 The shrine sits just north of the Hotou (Tiger Head) Mountain park, which features several hiking paths, including a cherry blossom path. The area closest to the Taoyuan Train Station is the most developed, with playgrounds and picnic tables, and further north and up the mountain it becomes a forest.

The mountain was historically farmland, and has been regenerated into forest, particularly the scented native Taiwania Cryptomerioides, which has elsewhere been overlogged for construction.  There are a few old military bunkers along the ridgeline dating back to the Japanese administration. 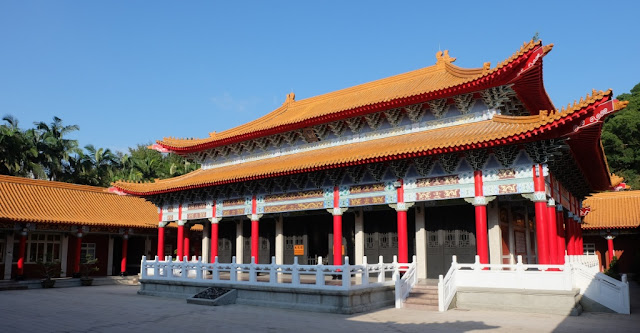 Signs warn of venemous snakes, so it's best to wear fully-covered shoes and long trousers. Snakes are afraid of humans, so if you encounter one always give it a chance to retreat. If bitten, tie a torquinet (eg backpack strap) around the affected limb between the bite and the heart and seek help immediately (dial 911). Do not drink alcohol as it thins the blood, allowing venom to travel faster.

Number 200, Cheng-kong Road, Section 3, Taoyuan District
園縣桃園市成功路三段200號
From Taipei, take bus 9069 towards Taoyuan from the Songjiang New Village (松江新村, Song Jiang Xin Cun) bus stop near Xingtian Temple Station Station to Taoyuan Veteran's Hospital (台北榮民總醫院桃園分院, Taipei Veteran's Hospital, Taoyuan Division). It should take about fourty minutes, or up to an hour in heavy traffic. From the hispital it's about a ten minute walk up the hill to the shrine.

From Taoyuan Train Station take the Taoyuan Express Bus towards Hutou Mountain (虎頭山), also Futoushan or Hutoushan). Alternatively it's a three-kilometer walk, about one kilometre of which can be through the Futoushan Park and around the hospital. There are buses to Taoyuan Train Station from Taiwan Taoyuan International Airport.

The shrine uses the term 忠烈祠, and is translated on signs around Futou Mountain to both Marty's Shrine and the "Hero Shrine".