The Xindian Cycle Path is one of Taipei's most pleasurable casual bike rides, and so easily for the short-term visitor to ride one-way with a Youbike. It follows the Xindian River, mostly along dedicated cycle paths, and unlike most "bike paths" in Taiwan it truly is only for cyclists and pedestrians; there should be no wayward cars or scooters along this track. The scenery is beautiful, and on fine evenings the riverside area takes on quite a festive atmosphere. Taipeiers come down in droves to relax along the river, musicians set themselves up to entertain the crowds and sometimes even Ballroom or Latin American social dances are held. If you will do just one long ride in Taipei I recommend it be this one. It follows well from a trip to Bitan Scenic Area. 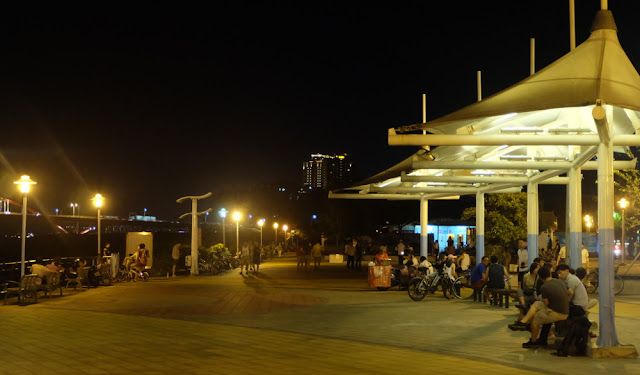 During the Japanese administration of Taiwan cycles were a popular means of transport. After Chiang Kai Shek and the took over Taiwan after WWII road rules became less well-enforced, bike theft increased and Taiwan reached its fame for the greatest number of scooters per capita in the world, and cycling was all but forgotten. It's undergoing a major revival, with cycleways opening up and talk of one around the whole perimeter of Taiwan. Some convenience stores along the coast are opening up 'cycle stations' with free bicycle pumps, an increasing number of serious riders are coming, especially from Japan.

Cycle commuting has been harder to revive, mostly because of a lack of bicycle secure storage facilities, so the excellent Youbike system has been introduced in Taipei, and there are similar systems in other cities.

The Xindian cycle path runs along the Xindian River from Taipei to Bitan (the end of the green MRT line, outside Xindian Station). It's used both for commuting and recreational cycling, and being a safe route well away from cars it's a popular outing for families with young children. Vendors sell helmets, torches and other cycling necessities along the way, but there is limited food and drink available. I recommend installing one of the Youbike Apps in order to find an empty racks to return your bikes to (see Youbike page)

There are no Youbike Stations on the river itself (which is too prone to flooding) but there are several a short distance away. It's possible to ride all the way to the Longshan Temple (about ten kilometres), visit other sights around the area (such as Ximen Ding and 2-28 Peace Park).


Or continue on to Tamsui?

It's possible to ride all the way to Tamsui (at least five hours), however there are some tricky turns to cross the Tamsui River near Taipei Main Station, so it really needs Google Maps with a data connection. Also, north of Taipei Main Station the bike path follows local roads, so it's common to encounter locals speeding home, much unlike the path along the Xindian River. As of October 2015 the last Youbike Station is at Fuxinggang Station, five stops south of Tamsui, however there is talk on the street of introducing one in  Tamsui itself. It would also be possible to ride to Beitou (for hotsprings and Japanese history).