Beitou is a geothermal region about half an hour by MRT from Taipei City. Famous for its hot springs and Japanese history, Beitou is a popular attraction for both domestic and international tourists, especially Japanese. Its famous 'eco' library is a great place to hang out and get some work or study done.

Take the Tamsui line towards Tamsui Station or Beitou Station. Transfer at Beitou Station to the Xinbeitou Line, which reaches XinBeitou Station (the only station, located beside the hotspring area) in a few minutes. From there it's a few minutes' walk to the Hot Springs Park. While one could easily spend a whole day in Beitou, especially with a hot spring and a visit to the Beitou (Folk Arts) Museum, most short-term visitors to Taiwan combine Beitou with Tamsui, twenty minutes to the north, since they are on the same MRT line.

1. The museums are closed on Mondays.
2. Bring a swimsuit if you plan to go to the public hot spring.

The geothermal activity of Beitou found its first use centuries ago as sulphur mines, however they were never very successful, and caused serious health problems for the miners.

In 1896 a Japanese businessman from Osaka, Hirita Gengo (平田源吾), set up Taiwan's first hot spring resort in Beitou (then known as Hokutō Village  / 北投庄. The region quickly developed into a thriving and prosperous tourist destination, complete with its own railway connecting it to the Tamsui railway (the precursors to the two MRT lines of today). In 1923 it welcomed Prince Hirohito (better known for his role in World War II) who enjoyed an onsen (hot spring bath) at the public bathhouse, which was then the largest bathhouse in the Japanese empire and is now the Beitou Hot Springs Museum (below).

After the Japanese defeat in World War II Beitou became very neglected, as the new Chinese rulers didn't care for hot springs, and their take-over created so much political, social and economic turmoil that a pleasant soak in hot springs was far from the minds of most Taiwanese. That began to change in the 1990s, when Taiwan was well on its way to democracy, livelihoods were improving and Taiwanese were beginning to take weekends and recreation seriously for the first time in a generation. Major resources were poured into Beitou to restore it to its former Japanese style, and it quickly grew into the prime tourist attraction it is today.

For many tourists a hot spring is an essential stop in Beitou, if not the main purpose for going. Hotsprings resorts line Guangming Road (opposite the park) with more upmarket places generally further from the park, with many offering shuttle services to Xin Beitou Station. Many offer both public and private hot springs. It should be noted that Beitou is very touristy, and, much like other public hotsprings resort areas in Taiwan such as Wulai and Jiaoxi, many people question the authenticity of the hot spring water. For anyone new to hot springs or just visiting Taiwan for a short while visiting a hot spring will probably be a relaxing and thoroughly enjoyable experience (whether the water is real, fake or a mixture of both) but a hot spring connoisseur from Japan may be wise to save their Yen for their next visit to the Japan Alps, and enjoy a historical tour of Beitou instead. If you do indulge in a hot spring in Beitou note that prices are significantly higher and onsen more crowded during the weekend (especially the public onsen below), so try to fit a trip to Beitou in on a weekday. Prices are likely to change on the time, so it's best to either book an overnight room online (through Agoda, Booking,com etc) or for a public bath just walk down the street, check photos and prices and decide where you'd like to go.

In traditional Japanese hot springs (known as onsens) bathers are separated by gender, who must bathe au naturel, But the majority of hot spring hotels with public hot springs now offer mixed-gender onsens in which swimwear is required.

It's essential to wash oneself fully at the attached public showers before entering the public bath, for obvious reasons. Prices for public onsen generally start at around NT300, or for a cheaper, outdoor experience try the Millennium Hot Springs.

These public hot springs offer a chance for a soak in true onsen water for as little as NT40 (plus NT20 for a secure locker if you need one). This makes them enormously popular, so they can become very crowded, sometimes so much so that there can be long queues just to get in the door. If you're going to go, try to make it on a weekday. They offer a variety of pools at different temperatures, and on the right day can be very relaxing. Being mixed gender swimsuits are required (so don't bring your Japanese friends!) but overpriced ones are sold there if you need one. Opening hours vary but are generally from very early in the morning until late at night.

Equally popular are smaller baths rented privately by couples or groups, either by the hour or as an overnight hotel package. A small bathtub generally starts at around 1000 per hour (sometimes less for a very basic one on a weekday) and goes north from there. Hotel bookings generally start at around 5,000 per night.

The Sweetme Hotel (bath pictured above) is a few minutes walk from Xinbeitou Station, beside the Su vegetarian restaurant, and gets good reviews on Agoda, where it can be booked for around NT4,000 (two people, including breakfast).

The Beitou Park (北投溫泉親水公園, also Beitou Hotsprings Park and Qin Shui Park) was, when it was built in 1923, the largest park in Taiwan. It offers pleasant walking paths along the geothermal river, and at places it's possible to immerse one's feet in the hot water, which is a popular pastime of young students who com here to relax and socialise. Inside the park is the Hot Springs Museum, the Beitou Library and the (public) Millenium Hot Springs (see below).

The Taipei City Library Beitou Branch is a remarkably eco-friendly structure for a Taiwanese government building (or any building). It's made of sustainably logged wood, has large windows to capture light and heat, is well insulated, recycles water from the roof for toilets and even has solar panels on the roof. It's one of the most charming libraries I've ever been to, and is a very popular place to read, study or just sit out the afternoon, especially among students. It offers free wifi and power outlets, and a small range of English reading material for adults and a fairly large collection for children.
Source: Beitou City Government


Following the defeat of the Japanese empire during WWII and the subsequent handover of Taiwan to the the Chinese Nationalists (KMT), this beautiful colonial building was used for various government purposes and then eventually abandoned. Like so many beautiful old Japanese buildings it fell into a bad state of disrepair and plans were made to demolish it to make way for a controversial new gondola up to Yangmingshan. This plan met great opposition from the local community and has been plagued with scandals and public concerns about the safety of building such a structure in a geothermal region, so it has never eventuated.

In 1994 a group of students and teachers from Beitou Elementary School recognised its historical significance, and petitioned to have it protected. The government finally acknowledged the building's importance in 1997, upon which they restored it and opened it as the museum it is today.

Essentials
The plum garden is right beside the entrance to the Millennium (public) Hot Springs. It's small enough that it's easy to miss it, and assume that it's part of the hot spring facility. Address: 6 Zhongshan Road.
Tuesday-Sunday 9:00-5:00
02-28972647
Website

The Plum Garden (梅庭) is the beautifully restored summer retreat of renowned calligrapher and politician Youren Yu (于右任). It's a beautifully restored 1930s Japanese home and garden, and while there's not a lot to see, it's worth a visit while you pass through the park or on your way to Geothermal Valley, Puji Temple of Beitou Museum. 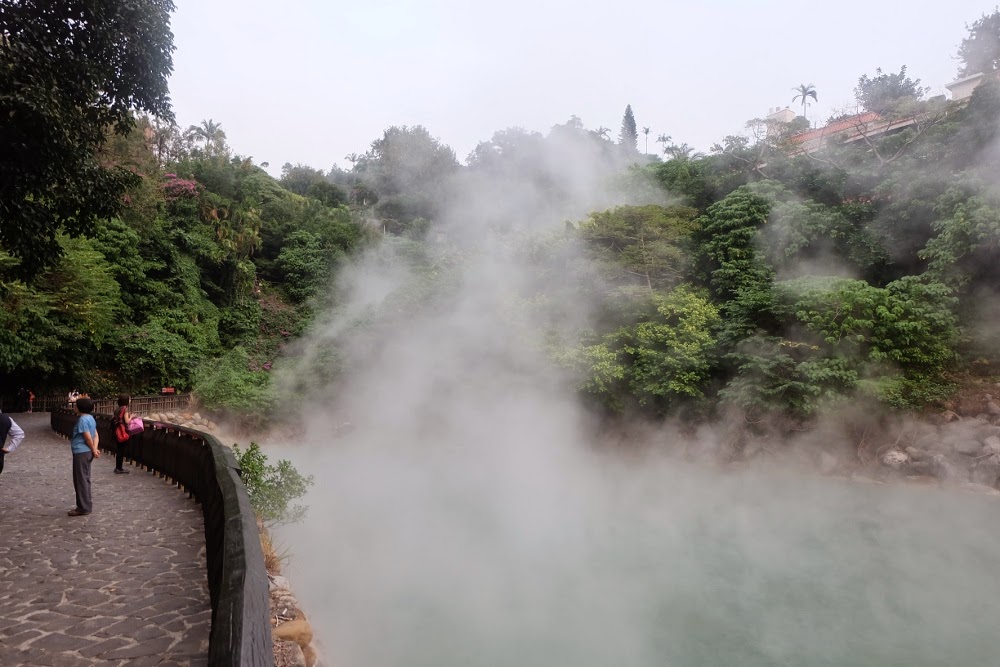 Geothermal Valley (地熱谷, also Hell Valley) is an large pool of steaming geothermal water. It's one of Beitou's most famous attractions, and a popular spot for photographs with a steamy background against a lush green backdrop. It's about a ten minute walk from the park, and not far from the Puji Temple. 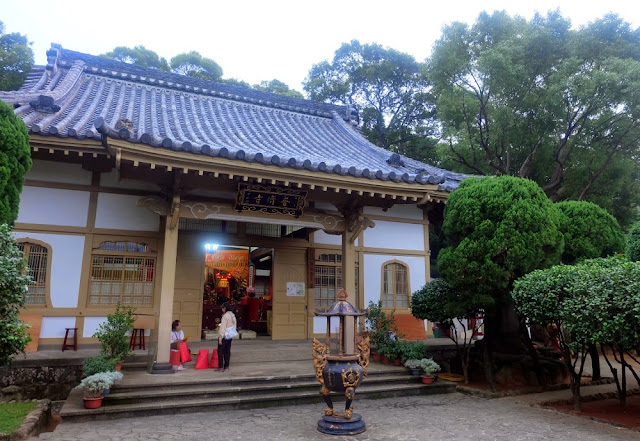 Puji Temple (普濟寺) is a beautiful Japanese Buddhist temple not far from Geothermal Valley. Construction began in 1905, and was completed in 1915 with help from donations by Japanese railway workers. It has been very well preserved. Like Chi'An Ching Hsou Temple in Hualien, it was founded by the Shingon School of Buddhism, the only significant Buddhist group today to encourage compassion for animals and vegetarianism. While it's a beautiful spot and well worth a visit, it's important to note that it's an active religious site, and not intended as a tourist attraction. The temple is reached via steps from the road. 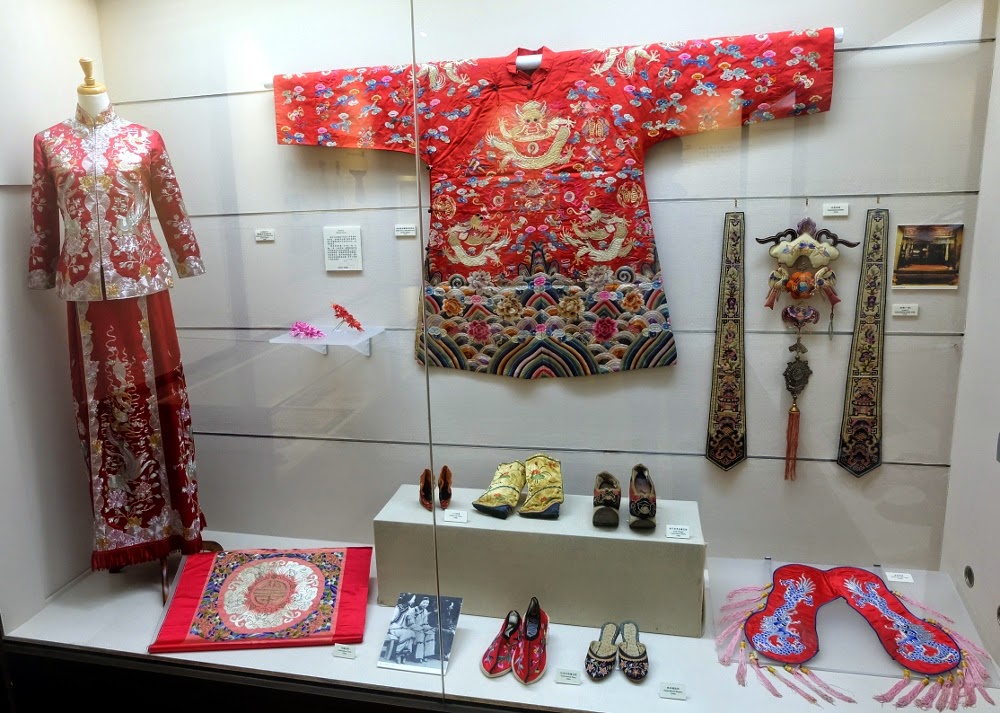 The Beitou Museum (北投文物館) preserves about five thousand pieces of Taiwanese folk craft from the Qing Dynasty until the 1970s. It's housed in the best-preserved Japanese building in Beitou, which has been beautifully restored, complete with two small stone gardens. In its day was the most luxurious hot spring hotel in Taiwan. The museum also has a cafe and restaurant (vegetarian meals must be ordered two days in advance). Located about 1.5 kilometres uphill from downtown Beitou it's somewhat inconvenient to get to, but it's well worth the effort. I recommend taking a taxi, as the road is narrow and steep in places, and shuttle buses tear around corners at frightening speeds to deliver patrons to the more exlusive hot spring hotels in this area.

Like nearby Tamsui, most people visit as a day trip from Taipei, but it's well worth spending a night in Beitou, especially if you'd like to try the luxurious Hot Spring hotel experience.